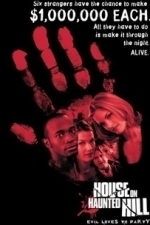 How far would you go for a million dollars? Would you spend the night in a haunted house? When twisted billionaire Stephen Price and his devilish wife, Evelyn, offer six strangers one million dollars each, there is only one rule to the game: they'll have to survive one night in a former mental institution, haunted by the ghosts of the inmates killed there, and an insane doctor who did unspeakable things... At first, everyone is having fun, thinking that the whole thing is a joke. But once the entire house automatically seals itself shut, they realize that this is no joke.