If You Can't Trust the Living 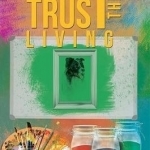 In an effort to escape unwarranted and adverse media attention, Robin Tyler rents a house in Cushlow Close, a family-owned development of four properties in a remote location. The striking-looking but mild-mannered Robin had enjoyed a charmed life in the city but is totally unprepared for country living. His new neighbour, artist Kodi Bates, helps him to adjust but their friendship quickly disrupts the lives of other residents in the Close. Suffering the most serious disruption is her twin brother Aran Cushlow's family. Widower Aran is about to remarry but, convinced she has seen her mother in a nearby town, Aran's daughter Lisa attempts to scupper his plans. When Lisa's sighting is dismissed as wishful thinking by both her family and the police, impulsive actions by the teenager backfire in a way the girl could never have anticipated, leaving everyone in Cushlow Close with decisions to make.

Images And Data Courtesy Of: Austin Macauley Publishers.
This content (including text, images, videos and other media) is published and used in accordance with Fair Use.