The Improv: An Oral History of the Comedy Club That Revolutionized Stand-Up 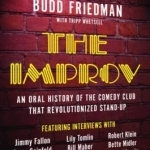 Add New Image or Add New Video
Edit
The Improv: An Oral History of the Comedy Club That Revolutionized Stand-Up

Have you heard the one about the aspiring Broadway producer who bought a closed restaurant and changed the course of American comedy? It's no joke--his name is Budd Friedman, and his legendary club helped shape the stand-up comedy that is still a staple of entertainment today. From the microphone to the iconic brick wall, the Improv has been the launching pad of the nation's most talented comedians. By providing a stage for them to riff on everything from race and religion to politics and sex, the Improv not only generated legions of comedy fans, it reinvented the art form by overturning the comedy traditions of the Borscht Belt. Budd Friedman's legendary comedy club wasn't the first to feature comedians, but it was the first of its kind to present comedians in a continuous format, and the first one to give unknown performers the opportunity to try out new material in front of a live audience--with the opportunity to be discovered by talent agents and late-night TV bookers. The Improv is an oral history of the most important comedy club in America, emceed by Budd Friedman himself, and featuring in-depth interviews with some of the most important names in comedy --including Jay Leno, Michael Keaton, Bill Maher, Larry David, Larry Miller, Jeff Garland, Jerry Stiller, Kevin Nealon, Gilbert Gottfried, Joe Piscopo, Tim Reid, Will Shriner, Roseanne Barr, Judd Apatow, Robert Klein, Richard Lewis, Leslie Moonves, Howie Mandel, Bill Engvall, Lily Tomlin, Rick Newman, Norman Lear, Billy Crystal, Alan Zweibel, Dick Cavett, Fred Willard, Jimmie Walker, David Steinberg, and many more! The Improv gives readers an exclusive, insider look at what really happened on stage and off-mike. From the revelry and the rivalry to the smash hits, near misses, love affairs, show biz politics, chemical experimentation, exhilarating rises, tragic downfalls and just plain fun, The Improv features true insiders' accounts of a unique institution in America's cultural history and the man who unofficially provided the laugh track for an entire nation.

Images And Data Courtesy Of: BenBella Books.
This content (including text, images, videos and other media) is published and used in accordance with Fair Use.