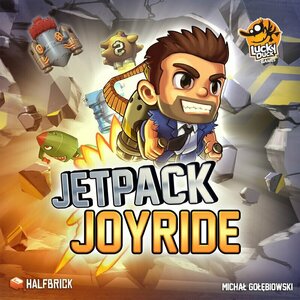 Jetpack Joyride is a real-time competitive puzzle game adapted from the mobile game of the same name! Players need to fly their way through a lab using a stolen jetpack over a series of three rounds. During each round:

1) Players receive four new lab cards.
2) All players, in real-time and at the same time, grab tiles from the common pool and lay them to trace their way through their lab.
3) Points are scored through mission cards or by collecting coins!
4) The first player to reach the end of their lab triggers the end of the round.
5) Scores are totaled and written down for the round.
6) Players, starting from the one with the lowest score, pick a permanent gadget out of a river of four.
7) A new round begins!

Whoever has the most points at the end of the third round wins!