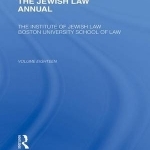 Volume 18 of The Jewish Law Annual contains six comprehensive articles on various aspects of Jewish law. Three articles address family law. One addresses the painful issue of the plight of the wife whose husband withholds conjugal relations. In a marriage where relations are withheld, the wife may seek a divorce, while her husband may withhold divorce. Prolonged withholding of divorce renders the wife an agunah, that is, a wife chained to a dead marriage and unable to start anew and rebuild her life. The author explores the halakhic feasibility of allowing a wife in such a predicament to bring a claim for damages against her husband for infliction of mental distress. If such claims are allowed, recalcitrant husbands may rethink their intransigence and consent to grant the divorce. Another article examines the evolution of halakhic thinking on the parent-child relationship.

It traces the stages by which halakhic family law changed from a basically patriarchal system in which both mother and the child were deemed subject to the father's will, to a more balanced system where wife and husband have equal standing with respect to custody matters, and the best interest of the child is the main consideration in custody proceedings. In another article, halakhic attitudes to corporal punishment of children are analyzed. The author explores whether the "Spare the rod and spoil the child" adage, which is based on a verse from Proverbs, indeed reflects the position of Jewish law. He shows that in fact, while recourse to corporal punishment for educational purposes is permitted--subject to detailed qualifications that greatly limit its scope--two divergent approaches to corporal punishment can be discerned in the halakhic sources. One maintains that administration of corporal punishment can be a useful pedagogic tool of last resort, whereas the other seeks to minimize recourse to corporal punishment in the educational context, questioning its efficacy.

The article shows that in any event, the notion that corporal punishment is required by the law, as some, invoking the "spare the rod" maxim, have maintained, is by no means borne out by the halakhic literature. The volume also features a fascinating article on the history of two societies founded in London to further the study of Jewish law using modern scholarly methodologies. One society was active at the end of the 1920s and beginning of the 1930s, the second was active a decade later. The article explains the background to the establishment of the societies and analyzes the societies' objectives, leaders and memberships. Both societies were founded with the intention of reformulating the classic halakhic sources in a manner that would render them suitable for contemporary application in the nascent Jewish state. But as the author shows, ultimately much of their energy was devoted to presenting the said sources to the non-Jewish legal world, for the purpose of reciprocal enrichment and edification. Rounding out the volume are two jurisprudential studies on classic legal problems.

The first explores the prohibition against seeking a second legal ruling when a ruling declaring something forbidden has been handed down. What is the scope of this rule, and in what ways does it differ from the res judicata principle in western law? The author shows that both procedural and substantive readings of the prohibition were put forward in the talmudic commentaries, and explains the jurisprudential implications of these different readings. The second article examines the question of the agent who breaches his principal's trust, focusing on the case of the agent who executes the act he was sent to carry out, but does so for himself, rather than his principal. To what extent is he liable for ensuing damages to the principal, and is his act invariably deemed reprehensible? Another issue is the legal status of the transaction carried out by such an agent. Do the rights and obligations generated by the transaction accrue to the agent, or to the principal? And how are determinations as to the status of the transaction to be made? Is the testimony of an unfaithful agent, or one who has deviated from his mandate, deemed trustworthy?

Is any role played by third parties, such as vendors, in determining the status of the transaction?

Images And Data Courtesy Of: Taylor & Francis Ltd.
This content (including text, images, videos and other media) is published and used in accordance with Fair Use.