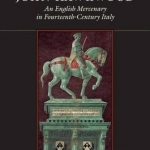 This book is the winner, 2008 Otto Grundler Book Prize, The Medieval Institute Notorious for his cleverness and daring, John Hawkwood was the most feared mercenary in early Renaissance Italy. Born in England, Hawkwood began his career in France during the Hundred Years' War and crossed into Italy with the famed White Company in 1361. From that time until his death in 1394, Hawkwood fought throughout the peninsula as a captain of armies in times of war and as a commander of marauding bands during times of peace. He achieved international fame, and city-states constantly tried to outbid each other for his services, for which he received money, land, and, in the case of Florence, citizenship-a most unusual honor for an Englishman. When Hawkwood died, the Florentines buried him with great ceremony in their cathedral, an honor denied their greatest poet, Dante. William Caferro's ambitious account of Hawkwood is both a biography and a study of warfare and statecraft. Caferro has mined more than twenty archives in Britain and Italy, creating an authoritative portrait of Hawkwood as an extraordinary military leader, if not always an admirable human being.

Images And Data Courtesy Of: Johns Hopkins University Press.
This content (including text, images, videos and other media) is published and used in accordance with Fair Use.