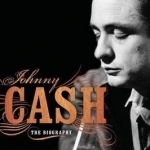 To millions, he was the rebellious Man in Black, the unabashed patriot, the redeemed Christian-the king of country music. But Johnny Cash (1932-2003) was also an uncertain country boy whose dreams were born in the cotton fields of Arkansas and who struggled his entire life with a guilt-ridden childhood, addictions, and self-doubt. Johnny Cash: The Biography explores many often overlooked aspects of the legend's life and career, uncovering the origins of his songwriting and trademark boom-chicka-boom rhythm and delving into the details of his personal life, including his drug dependency, which dogged him long after many thought he'd beaten it. Scrupulously researched, passionately told, Johnny Cash: The Biography is the unforgettable portrait of an enduring American icon.

Images And Data Courtesy Of: The Perseus Books Group.
This content (including text, images, videos and other media) is published and used in accordance with Fair Use.