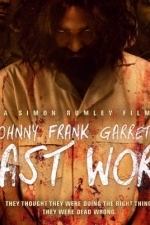 Despite protesting his innocence to the last, Texan teenager Johnny Frank Garrett (Devin Bonnee) is sentenced to death for the rape and murder of an elderly nun. But as his execution day arrives, Garrett makes a chilling promise to everyone involved in his demise. As tragedy and trauma befall his executioners and their families, it seems that fate is following Johnny Frank's curse to the letter. But one juror (Mike Doyle) is determined to stop the madness. Imaginative supernatural horror from British director Simon Rumley, based on disturbingly real events.

Main Image Courtesy: A7SLE Films.
Images And Data Courtesy Of: A7SLE Films.
This content (including text, images, videos and other media) is published and used in accordance with Fair Use.