Knowing Me Knowing You with Alan Partridge: BBC Radio 4 Comedy 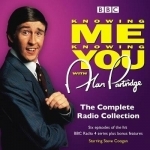 Images And Data Courtesy Of: BBC Audio, A Division Of Random House.
This content (including text, images, videos and other media) is published and used in accordance with Fair Use.