Love or Sacrifice (Mages of the Nether #3) 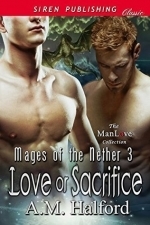 William has watched on the sidelines as his cousins Marcus and Daniel both found love. He's done his part as a shield for the future king and sacrificed his own heart in the building war between the families. Now, he's being tested again. Nevada is the third son of the Gallo family, the closest allies to the Dalrymple family. He comes to Aiden when he's attacked by the same people that plotted against the House of the Dragon forty years ago. The same faction that would see the balance destroyed. William volunteers to take Nevada in and keep him safe so he may help them in finding the Blood of Aeon hiding in the Nether. While doing so, he must fight his growing interest and desires in the other mage. His duty must come first. Along the way they must unravel mysteries, fight off ancient enemies, and come to terms with what destiny has in store for them.