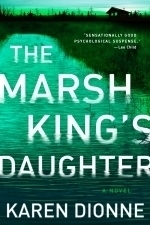 'If you only read one thriller this year, make it The Marsh King's Daughter. It's sensational' CLARE MACKINTOSH

The suspense thriller of the year - The Marsh King's Daughter will captivate you from the start and chill you to the bone.

When the notorious child abductor known as the Marsh King escapes from a maximum security prison, Helena immediately suspects that she and her two young daughters are in danger.

No one, not even her husband, knows the truth about Helena's past: they don't know that she was born into captivity, that she had no contact with the outside world before the age of twelve - or that her father raised her to be a killer.

And they don't know that the Marsh King can survive and hunt in the wilderness better than anyone... except, perhaps his own daughter.

Images And Data Courtesy Of: G.P. Putnam's Sons.
This content (including text, images, videos and other media) is published and used in accordance with Fair Use.