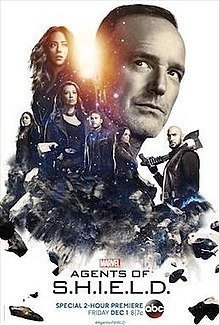 The fifth season of the American television series Agents of S.H.I.E.L.D., based on the Marvel Comics organization S.H.I.E.L.D., follows Phil Coulson and other S.H.I.E.L.D. agents and allies as they try to save the world from an apocalyptic future. It is set in the Marvel Cinematic Universe (MCU) and acknowledges the continuity of the franchise's films. The season was produced by ABC Studios, Marvel Television, and Mutant Enemy Productions, with Jed Whedon, Maurissa Tancharoen, and Jeffrey Bell serving as showrunners.

Main Image Courtesy: Wikipedia.
Images And Data Courtesy Of: ABC.
This content (including text, images, videos and other media) is published and used in accordance with Fair Use.

Linked to Marvel's Agents of S.H.I.E.L.D
Added By