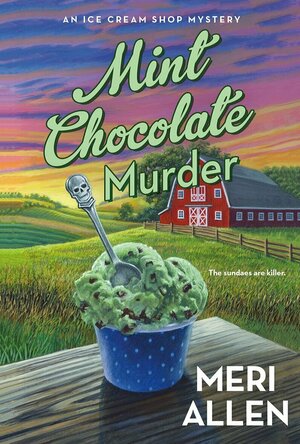 When Udderly Delightful Ice Cream shop manager Riley Rhodes is summoned to Penniman’s Moy Mull Castle, it’s the cherry on top of a successful summer season. The gothic pile built by an eccentric New England Gilded Age millionaire has been transformed into a premiere arts colony by Maud Monaco, a reclusive former supermodel. As part of Moy Mull’s Fall Arts Festival, Maud is throwing a fantasy ice cream social and hires Riley to whip up unique treats to celebrate the opening of an exhibit by Adam Blasco, a photographer as obnoxious as he is talented.

As Penniman fills up with Maud’s art-world friends arriving for the festival, gossip swirls around Blasco, who has a dark history of obsession with his models. Riley’s curiosity and instincts for sleuthing – she was a CIA librarian – are piqued, and she wonders at the hold the cold-hearted photographer has over the mistress of Moy Mull.

But when Adam is found dead behind the locked door of Moy Mull’s dungeon, Riley realizes there’s more than one suspect who’d wanted to put the malicious photographer on ice.

Main Image Courtesy: Cover.
Images And Data Courtesy Of: St. Martin's.
This content (including text, images, videos and other media) is published and used in accordance with Fair Use.