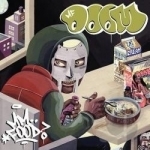 Mm..Food is the fifth studio album by British-American rapper/producer MF DOOM. It was released via Rhymesayers Entertainment on November 16, 2004.[1] It peaked at number 17 on Billboard's Independent Albums chart, and number 9 on Heatseekers Albums chart.[2] The title, Mm..Food is an anagram of "MF Doom."

Images And Data Courtesy Of: Rhymesayers Entertainment.
This content (including text, images, videos and other media) is published and used in accordance with Fair Use.