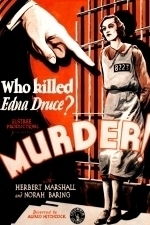 After actor-manager Sir John Menier votes to convict actress Diana Baring during her murder trial, he has doubts about the case and decides to investigate before she is executed.