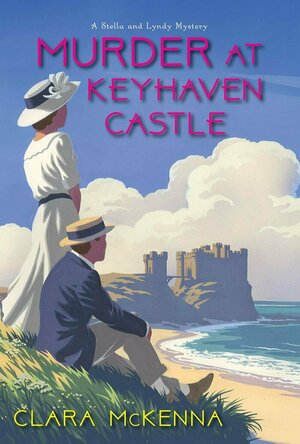 With her wedding to Viscount “Lyndy” Lyndhurst just days away, strong-willed American ex-pat Stella Kendrick is the talk of Edwardian society—and the focus of a deadly mystery—in Clara McKenna’s third historical mystery set in England’s New Forest region at the turn of the 20th century.

Between ornate bridal gown fittings and meetings with Lyndy’s distant relatives, Stella finally feels less like an out-of-place American and more like a respected aristocrat. Everything changes as the arrival of an anonymous gift and return of her overbearing father cast a dark shadow over the festivities, conjuring difficult memories and new fears . . .

Tensions intensify when a daytrip to Southampton ends with a suspicious stranger getting trampled by a horse-drawn cab. Before anyone can explain why the victim possessed a newspaper clipping about the upcoming ceremony at Morrington Hall, tragedy strikes again, this time resulting in a murder that turns Stella’s world completely upside down while implicating one of Lyndy’s well-regarded family members . . .

Stella and Lyndy rush to connect two very different crimes and identify the guilty culprit hiding among elite wedding guests. But as the couple blows the lid off of scandalous secrets, they realize that catching this killer—and living to tell the tale—may prove as impossible as closing the class divide.