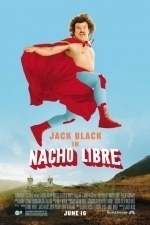 A religious Mexican cook named Ignacio moonlights as a masked luchador to support the monastery orphanage where he was raised.