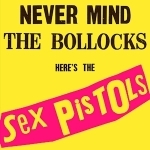 Never Mind the Bollocks Here's the Sex Pistols is the only studio album by English punk rock band the Sex Pistols, released on 28 October 1977 by Virgin Records.

At the time of its release, the band was already extremely controversial, having sworn on live TV, been fired from two record labels, and been banned from playing live in most parts of England. The album's title added to that controversy, with some people finding the word "bollocks" offensive. Many record stores refused to carry the album and some record charts refused to list the album, showing just a blank space instead.

Main Image Courtesy: https://en.m.wikipedia.org/wiki/Never_Mind_the_Bollocks,_Here%27s_the_Sex_Pistols.
Images And Data Courtesy Of: Virgin.
This content (including text, images, videos and other media) is published and used in accordance with Fair Use.