No Flag (After Everything #1) 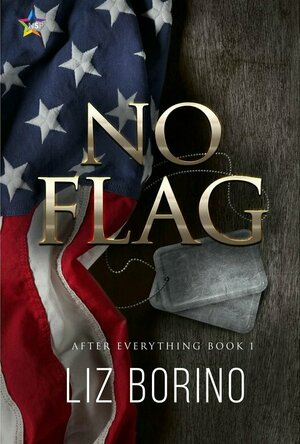 Captain Mike Kelley does not ignore his intuition, so when sexy bartender Will Hayes captures his heart, Mike embarks on a mission to win him over to a Domestic Discipline relationship. Will accepts with one caveat: Mike must promise not to renew his army contract.

Mike agrees, until the army invokes the stop-loss military policy to involuntarily extend his commission and send him back overseas, rendering him powerless and threatening everything he and Will have built. Will, left alone to cope with a new café, must rely on the support of old friends who may no longer be trustworthy.

A horrific terrorist attack on Mike’s outpost changes everything, leaving them both at a loss.

Mike awakens in a hospital with a devastating injury and no recollection of the attack. As the only survivor, his memory may be the key to national security. Mike struggles to cope with his injury and Will struggles with his new role in Mike’s life.

For Mike and Will, “No Flag” meant “come home alive.” Will has Mike back rather than a folded flag, but in the aftermath of war, can they rebuild the life they had before?

Main Image Courtesy: Amazon.
Images And Data Courtesy Of: NineStar Press.
This content (including text, images, videos and other media) is published and used in accordance with Fair Use.