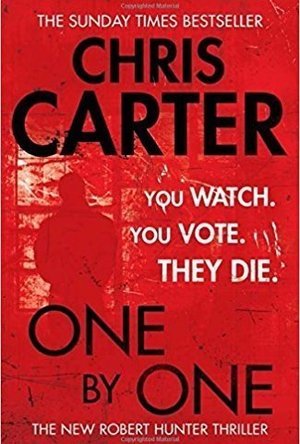 Add New Image or Add New Video
Edit
One By One

Detective Robert Hunter of the LAPD's Homicide Special Section receives an anonymous call asking him to go to a specific web address - a private broadcast. Hunter logs on and a show devised for his eyes only immediately begins.

But the caller doesn't want Detective Hunter to just watch, he wants him to participate, and refusal is simply not an option.

Forced to make a sickening choice, Hunter must sit and watch as an unidentified victim is tortured and murdered live over the Internet.

The LAPD, together with the FBI, use everything at their disposal to electronically track the transmission down, but this killer is no amateur, and he was more than prepared for it.

Before Hunter and his partner Garcia are even able to get their investigation going, Hunter receives a new phone call. A new website address. A new victim. But this time the killer has upgraded his game into a live murder reality show, where anyone can cast the deciding vote.

Main Image Courtesy: Chriscarterbooks.com.
Images And Data Courtesy Of: Simon & Schuster.
This content (including text, images, videos and other media) is published and used in accordance with Fair Use.