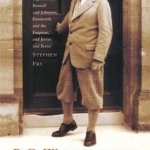 Are there any characters in literature more famous than Jeeves and Wooster? Along with Lord Emsworth, Ukridge, Psmith, Mr Mulliner, a host of Drones and a chorus of Aunts, they featured in nearly 100 tomes, which taken together, make their creator, Sir Pelham Grenville Wodehouse, the best loved and most famous writer of comedy in the English language. But what of the man himself? Donaldson, who first met Wodehouse in 1921, was given unique access to his most important private papers and her definitive biography paints an in-depth and affectionate picture of the man known to his friends as "Plum". It covers his life from blissful school days at Dulwich, life in the City, early years writing for magazines to his love affair with Broadway and Hollywood, his time as a prisoner of war, his wartime broadcast from Berlin that had him wrongly branded a traitor for many years, and his final years in America.

Images And Data Courtesy Of: Carlton Books Ltd.
This content (including text, images, videos and other media) is published and used in accordance with Fair Use.