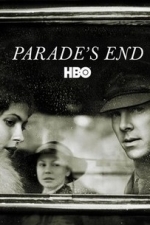 This World War I-era miniseries chronicles the tangled relationship between an aristocrat, his beautiful but unfaithful wife and a young suffragette.