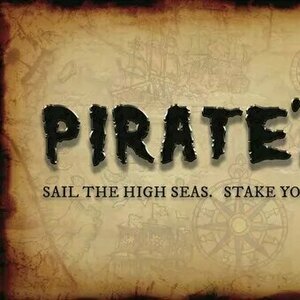 Pirate's Mark is a fast-paced card game of confidence, discovery, and bluffing. Avoid the dreaded Pirate's Mark as you navigate the open waters to gain prestige and treasure.Take turns staking your claim on how many cards you can pull without being marked. The last pirate without a Pirate’s Mark wins. Will it be you?

Gameplay is simple to pick up on. Cards are dealt out in a 13X10 grid all facedown on the table. There are one less dreaded Pirate's Mark cards in the deck than players. Players take turns clockwise making a bluff of how many cards they can pull without getting a Pirate's Mark card increasing their bid by at least one each time. When the bid gets high enough, let's say 17, a fellow pirate may call the bluff.

Once called, you have to prove your bluff by picking one card at a time from the grid. You can pick whatever card you have your eye one, but must follow the instructions on the cards. Some cards are curses that make the game more treacherous for you while others are a bit of luck. If you pull a Pirate's Mark card, you are out for now but may return later if you successfully call another pirate's bluff. However, if you are successful the player who called your bluff must pull a card themselves as punishment. Bluffing then resumes and gameplay continues until there are only 2 players left or 10 cards at sea. At this point, duel mode is enacted and players pull one card at a time until only one is left un-marked and wins the game!

This game keeps you on the edge of your seat because the tides can turn at any time. It's a great game for small and larger groups that mixes luck and skill well.