The Political Aesthetics of the Armenian Avant-Garde: The Journey of the 'Painterly Real', 1987-2004 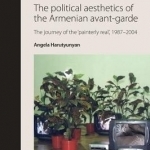 Add New Image or Add New Video
Edit
The Political Aesthetics of the Armenian Avant-Garde: The Journey of the 'Painterly Real', 1987-2004

This book addresses late-Soviet and post-Soviet art in Armenia in the context of turbulent transformations from the late 1980s to 2004. It explores the emergence of 'contemporary art' in Armenia from within and in opposition to the practices, aesthetics and institutions of Socialist Realism and National Modernism. This historical study outlines the politics (liberal democracy), aesthetics (autonomous art secured by the gesture of the individual artist), and ethics (ideals of absolute freedom and radical individualism) of contemporary art in Armenia and points towards its limitations. Through the historical investigation, a theory of post-Soviet art historiography is developed, one that is based on a dialectic of rupture and continuity in relation to the Soviet past. As the first English-language study on contemporary art in Armenia, the book is of prime interest for artists, scholars, curators and critics interested in post-Soviet art and culture and in global art historiography.

Added By
Edit this item to be credited with its creation
The Political Aesthetics of the Armenian Avant-Garde: The Journey of the 'Painterly Real', 1987-2004 Reviews & Ratings (1)
Sorting
Show Filters Filter Applied Reset Filter