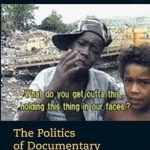 This wide-ranging study traces the history of the documentary from the first Lumiere films to Michael Moore's 'Fahrenheit 9/11'. Chanan argues that documentary makes a vital contribution to the public sphere - where ideas are debated, opinion formed and those in authority are held to account.

Images And Data Courtesy Of: British Film Institute.
This content (including text, images, videos and other media) is published and used in accordance with Fair Use.