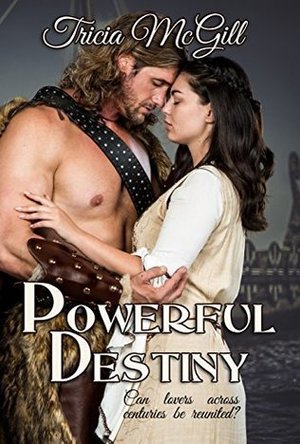 It is 850AD and Norse warrior Rolf lands on the shores of East Anglia determined to take revenge on a Celtic clan. Following a fierce battle, where the Celts are savagely killed, Rolf comes face to face with the daughter of the slain Celtic leader. So stunned by the beauty, along with the courage of Brigid, he is convinced that his Three Fates of Destiny brought them together. Resolved to make this woman his own, he spares the lives of the captured Celtic women and children and takes them back to his homeland across the ocean.

Strangely drawn to the Norseman who is so sure they are destined to be together, Brigid must fight against succumbing to the wishes of the man who killed her father. Nevertheless, to save her fellow Celtic captives from slavery or worse, Brigid must keep a bargain with the Norse leader—a bargain that will see her tied to him forever.

In present day Cornwall, naturally shy Rolf shares his secluded lighthouse with his wolfhound. An artist, he delights in the rugged scenery and ever-changing weather. While in the nearest bookshop one day, he meets a newcomer to town. Brigid’s unusual personality strikes a chord with him. Not only are both convinced they have met before, but their fascination for Viking and Celtic history forges an unusual bond between them. Outspoken and forthright, Brigid sets out to break down the barrier of reserve and caution Rolf has erected over the years. Is it simply whimsy or can lovers across centuries be reunited?

Images And Data Courtesy Of: BWL Publishing Inc.
This content (including text, images, videos and other media) is published and used in accordance with Fair Use.