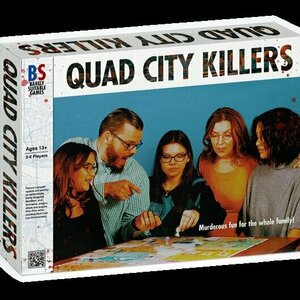 QCK is created in the style of an 80s board game, but with a bit of a dark side.

Players compete as Serial Killers, traveling between the Quad Cities and dispatching Prey in an attempt to gain Notoriety!

Each Prey ID card has a Defense level and Notoriety score. Upon successful attacks, Players keep these cards as their Trophies.

You Attack with a combination of:
- Your Serial Killer Dexterity and Victimology, found on your player board. Each giving you a particular set of advantages;
- Resource cards (Weapons, Modifiers, & Scenarios), which can be used in various combinations to create an advantage over your potential victims;
- and a Skill Roll using three (0,0,1,1,2,2) dice.
- All this is done while trying to avoiding Heat from Law Enforcement.

Each turn consists of 3 (out of 5 possible) Actions:
1. Hunting - revealing a new Prey card and placing it in its corresponding city.
2. Travel - moving from one city to another with a successful roll of the dice.
3. Attack - attempt to kill a Prey in the city you occupy using a combination of your Dexterity, Resource cards and a Skill Roll.
4. Play a Scenario Card creating a situation where you can attempt multiple attacks.
5. Discard up to two cards from your hand and replace them from the deck.

As Players rack-up kills, their Dexterity increases, but so does the heat in each city.

Play continues until one player reaches the peak of their Dexterity scale. At this point all Players total their Notoriety points and the player with the highest total wins!