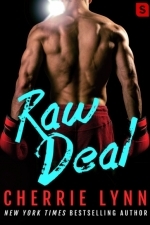 Savannah's brother was killed in a cage fight with Mike "Red Reaper" Larson after a savage punch to the head.

When Mike shows up at the funeral, he’s nothing like Savannah expected. Gone is the fierce, brutal beast she’s seen in the cage. In his place is a beautiful man torn with guilt, seeking forgiveness, and willing to do anything to ease her pain.

Her family doesn’t approve, but her heart doesn’t stand a chance. Irresistibly drawn together, neither of them can deny the intoxicating desire unleashed between them, turning their pain into the most exquisite pleasure.

But every time Mike steps into the cage, Savannah knows she could lose him too. She can’t go through that again, but how can she let go of the one man who sets her body and soul on fire?