Reap This Too (Oh So Happy Holidays #2) 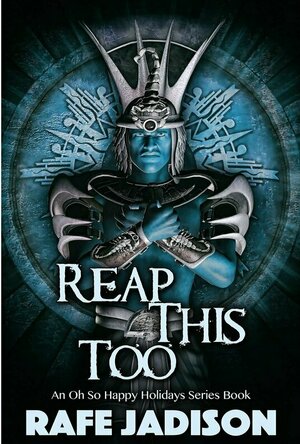 Unlike his parents and his twin Seamus, Ian O’Donnell is not a good witch. Or rather, he isn’t quite good at it. Studying charts and remembering candles hasn’t ever really been his thing. Still, he longs to see the mystical sites of the world, especially the Great Pyramids of Giza. When Ian finally reaches them, though, he finds himself more attracted to the sexy man who works the night shift at his hotel than he does the pyramids.

Ian’s able to convince Khnurn to take him to the desert for a romantic evening in front of the pyramids. Everything’s going great until Khnurn gets serious. He tells Ian he’s a vampire and they’ve known each other before. Unfortunately, Ian can’t recall ever having been in a serious relationship in this life, or any other, and he isn’t quite sure Khnurn isn’t just feeding him pick-up lines. When Khnurn leaves Ian alone to think about things, another man appears in Ian’s life, a crazy-looking spectre that might just be the Angel of Death.

Ian soon finds himself hightailing it back to Massachusetts just in time for Halloween with his wonderfully animated witch family and their coven. Unfortunately, it isn’t souvenirs Ian’s brought back with him, but rather the creepy spectre from the desert, and maybe a sexy vampire who might just be the love of his life.

Main Image Courtesy: Amazon.
Images And Data Courtesy Of: JMS Books LLC.
This content (including text, images, videos and other media) is published and used in accordance with Fair Use.