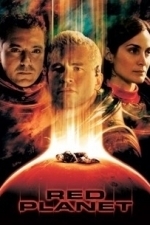 In the mid-21st Century, the nations of a dying Earth look starward for a solution and set to colonize Mars. But something no one could have expected awaits. Houston, we have big trouble.

Val Kilmer, Carrie-Ann Moss and Tom Sizemore star in this taut adventure about humankind's first mission to the mysterious Red Planet. Also on the mission is the multifunctional robo-assistant AMEE. In one mode, she's as loyal as a puppy. But a malfunction has locked her into a far different mode. She's become a killing machine bent on destroying the crew. Yet that's not the end of the expedition's perils. Because Mars may be barren, but it's not uninhabited.