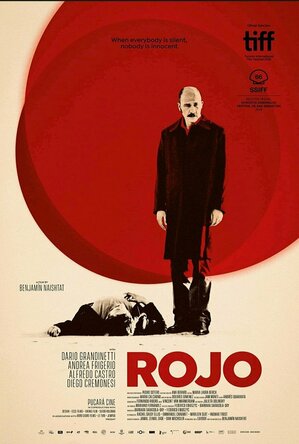 Argentina, 1976. Claudio Morán is a successful and respected lawyer of an Argentinian town that suffers an incident with another client in the restaurant where he awaits for his wife Susana to dinner, who reclaims his table to seat and eat. Mocking him about the stranger's bad manners and poor education, Claudio's words make that the stranger suddenly explodes in rage against everybody, being forced by the staff to leave the local just when Susana arrives. When they two are in the car to back home, the stranger appears again hitting the car and running away. Leaving the car behind the stranger to stop him, this one intercepts Claudio and both have a fight. Trying to calm him, Claudio see as the stranger hits himself and takes a gun pointing Claudio and Susana, who followed his husband, but instead to kill them the stranger shoots himself in the face. Seriously injured, Claudio takes the stranger into the car and leaves Susana in home saying her that he will moves the stranger to the hospital, but Claudio leaves him in the desert to die. Three months later, Claudio's life remains equal with Susana and their teenage daughter Paula, receiving the visit of Susana's best friend Mabel, her husband Vivas and their child. In the days previous to the General Videla coup d'etat that will change the country forever, with the military intervention above the horizon, violence unleashed by everywhere and people that miss every day, things complicate for Claudio when Mabel suffers a nervous breakdown during an expo art. Worried by her, Vivas reports Claudio about Mabel's stranded younger brother Dieguito, who years ago joined revolutionary movements to fight against repression of the government, missed three months ago while he traveled to meet Mabel. Realizing that the stranger was Mabel's brother, Claudio starts to feel cornered when Vivas tells him that he and Mabel have call famous Chilean detective Sinclair to find Dieguito if he's alive...or to his assassin if he's dead.

Main Image Courtesy: Imbd.
Background Image Courtesy: Empire.
Images And Data Courtesy Of: Rachel Daisy Ellis .
This content (including text, images, videos and other media) is published and used in accordance with Fair Use.