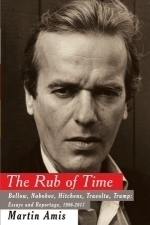 Of all the great novelists writing today, none shows the same gift as Martin Amis for writing non-fiction - his essays, literary criticism and journalism are justly acclaimed. As Rachel Cusk wrote in the The Times, reviewing a previous collection, 'Amis is as talented a journalist as he is a novelist, but these essays all manifest an unusual extra quality, one that is not unlike friendship. He makes an effort; he makes readers feel that they are the only person there.' The essays in The Rub of Time range from superb critical pieces on Amis' heroes Nabokov, Bellow and Larkin to brilliantly funny ruminations on sport, Las Vegas, John Travolta and the pornography industry. The collection includes his essay on Princess Diana and a tribute to his great friend Christopher Hitchens, but at the centre of the book, perhaps inevitably, are essays on politics, and in particular the American election campaigns of 2012 and 2016. One of the very few consolations of Donald Trump's rise to power is that Martin Amis is there to write about him.

Main Image Courtesy: http://www.penguinrandomhouse.com/books/3246/the-rub-of-time-by-martin-amis/9781400044535/.
Background Image Courtesy: http://www.penguinrandomhouse.com/books/3246/the-rub-of-time-by-martin-amis/9781400044535/.
Images And Data Courtesy Of: Random House Children's Publishers UK.
This content (including text, images, videos and other media) is published and used in accordance with Fair Use.