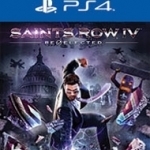 Saints Row IV is an open world action-adventure video game developed by Volition and published by Deep Silver. It is the fourth title in the Saints Row series. In the game, the playable character is the leader of the 3rd Street Saints, a street gang that has become the world's most powerful and popular organization, and must fend off an alien invasion after becoming President of the United States and receiving superpowers. The player is free to explore their environment while completing main and side missions at their leisure. The game incorporates elements from science fiction video games and films, and continues the series' reputation for over-the-top parody. It was released in August 2013 for Microsoft Windows, PlayStation 3, and Xbox 360, and was later ported to PlayStation 4, Xbox One, and Linux in 2015.