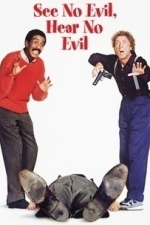 Two witnesses to a murder, one (Dave) didn't hear it, the other (Wally) didn't see it, and now they are suspects wanted by the police and the people responsible...