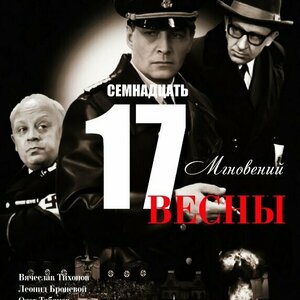 A 1973 Soviet twelve-part television series, directed by Tatyana Lioznova and based on the novel of the same title by Yulian Semyonov. The series portrays the exploits of Maxim Isaev, a Soviet spy operating in Nazi Germany under the name Max Otto von Stierlitz, depicted by Vyacheslav Tikhonov. Stierlitz is tasked with disrupting the negotiations between Karl Wolff and Allen Dulles taking place in Switzerland, aimed at forging a separate peace between Germany and the Western Allies. The series is considered the most successful Soviet espionage thriller ever made, and is one of the most popular television series in Russian history.