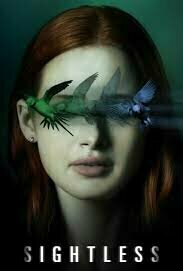 Sightless is a 2020 American psychological thriller film written and directed by Cooper Karl, based on his 2017 short film of the same name. The film stars Madelaine Petsch and Alexander Koch.

Images And Data Courtesy Of: Kaila York.
This content (including text, images, videos and other media) is published and used in accordance with Fair Use.