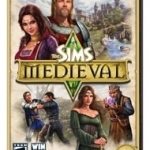 The Sims go back in time and get medieval! The Sims Medieval takes The Sims into the Middle Ages with all new features, new graphics and new ways to play. For the first time, players can create heroes, venture on quests, and build up a kingdom. In an ancient land of adventure, drama and romance, players will be able to get medieval like never before.

• A living world of Sims in an age of adventure, drama, and romance

• Create heroes, build up their skills and send them on epic quests

• Kingdom Ambitions – Choose a ambitious goal for your kingdom and work to achieve it. Will you kingdom be the most wealthy, most enlightened, a conqueror or a peacemaker? The choice is yours

Images And Data Courtesy Of: Electronic Arts.
This content (including text, images, videos and other media) is published and used in accordance with Fair Use.