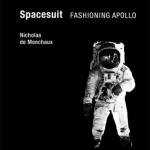 When Neil Armstrong and Buzz Aldrin stepped onto the lunar surface in July of 1969, they wore spacesuits made by Playtex: twenty-one layers of fabric, each with a distinct yet interrelated function, custom-sewn for them by seamstresses whose usual work was fashioning bras and girdles. This book is the story of that spacesuit. It is a story of the triumph over the military-industrial complex by the International Latex Corporation, best known by its consumer brand of "Playtex" -- a victory of elegant softness over engineered hardness, of adaptation over cybernetics. Playtex's spacesuit went up against hard armor-like spacesuits designed by military contractors and favored by NASA's engineers. It was only when those attempts failed -- when traditional engineering firms could not integrate the body into mission requirements -- that Playtex, with its intimate expertise, got the job. In Spacesuit, Nicholas de Monchaux tells the story of the twenty-one-layer spacesuit in twenty-one chapters addressing twenty-one topics relevant to the suit, the body, and the technology of the twentieth century.

He touches, among other things, on eighteenth-century androids, Christian Dior's New Look, Atlas missiles, cybernetics and cyborgs, latex, JFK's carefully cultivated image, the CBS lunar broadcast soundstage, NASA's Mission Control, and the applications of Apollo-style engineering to city planning. The twenty-one-layer spacesuit, de Monchaux argues, offers an object lesson. It tells us about redundancy and interdependence and about the distinctions between natural and man-made complexity; it teaches us to know the virtues of adaptation and to see the future as a set of possibilities rather than a scripted scenario.

Images And Data Courtesy Of: MIT Press Ltd.
This content (including text, images, videos and other media) is published and used in accordance with Fair Use.