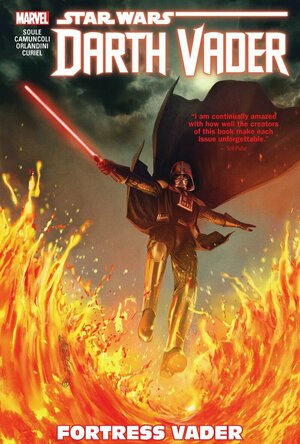 Continuing the imperious rise of the Dark Lord! A Jedi makes a desperate deal. The Inquisitors' mission evolves. And Darth Vader discovers a theft... And when the thief faces the consequences of their crime, Emperor Palpatine rewards Darth Vader with three gifts: A thing, a choice...and a voice. Seeking the path to his destiny, Vader returns to the place of his birth. There, echoes from the past reach out to him - both his own past, and the dark history of the Sith! Be here for a story that could only be called "Fortress Vader"! COLLECTING: DARTH VADER 19-25

Main Image Courtesy: marvel.com.
Images And Data Courtesy Of: Marvel Comics.
This content (including text, images, videos and other media) is published and used in accordance with Fair Use.