Stay Sexy and Don't Get Murdered: The Definitive How-To Guide From the My Favorite Murder Podcast 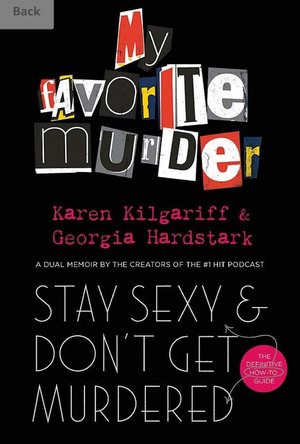 The highly anticipated first book by Karen Kilgariff and Georgia Hardstark, the voices behind the #1 hit podcast My Favorite Murder!

Sharing never-before-heard stories ranging from their struggles with depression, eating disorders, and addiction, Karen and Georgia irreverently recount their biggest mistakes and deepest fears, reflecting on the formative life events that shaped them into two of the most followed voices in the nation.

In Stay Sexy & Don’t Get Murdered, Karen and Georgia focus on the importance of self-advocating and valuing personal safety over being ‘nice’ or ‘helpful.’ They delve into their own pasts, true crime stories, and beyond to discuss meaningful cultural and societal issues with fierce empathy and unapologetic frankness.

“My Favorite Murder started as a way for Karen Kilgariff and Georgia Hardstark to work through their fears. Now it’s a worldwide community…. Even its darkest moments are lightened by Karen and Georgia's effortlessly funny banter and genuine empathy.” —RollingStone.com

About the Author
Known for her biting wit and musical prowess, Karen Kilgariff has been a staple in the comedy world for decades. As a performer, she has appeared on Mr. Show, The Book Group, and Conan. She then transitioned to scripted television, writing for shows like Other Space, Portlandia, and Baskets. Her musical comedy album Live at the Bootleg was included in Vulture's Best Standup Specials and Albums of 2014.

Georgia Hardstark has enjoyed a successful career as a food writer and Cooking Channel on-camera personality, which began with the invention of the farcical cocktail, The McNuggetini. She went on to co-host a travel/adventure/party show called Tripping Out with Alie & Georgia, and a regular gig on Cooking Channel’s #1 show, Unique Sweets. She capped that off as a repeat guest narrator on Comedy Central’s hit show Drunk History.

Main Image Courtesy: Amazon.
Images And Data Courtesy Of: Trapeze.
This content (including text, images, videos and other media) is published and used in accordance with Fair Use.