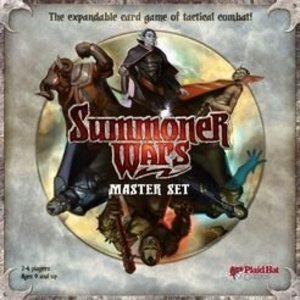 Summoner Wars is a fast-playing, action-packed card game for 2-4 players in which they take on the role of Summoners: powerful beings who harness the power of mysterious Summoning Stones to lead their race to conquest on the war-torn planet of Itharia. These Summoners wield terrible magic on the battlefield, freezing their foes in place, draining their enemies of power, and even bringing rains of fire down from the heavens. But most notoriously, they summon their great race's hordes of warriors to the battlefield, to clash in the never-ending struggle for supremacy. A Summoner is both mage and general, and must combine their wizardly might with clever tactics to defeat the enemy Summoner on the opposite side of the battle.

Images And Data Courtesy Of: Plaid Hat Games.
This content (including text, images, videos and other media) is published and used in accordance with Fair Use.