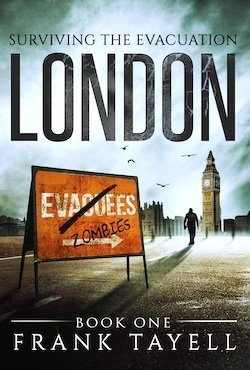 Would you survive the Evacuation?
The outbreak began in New York. Soon it had spread to the rest of the world. People were attacked. They died. They came back. Zombies. As anarchy and civil war took grip across across the globe, Britain was quarantined. Martial law, curfews, and rationing were implemented. It wasn't enough. An evacuation was planned.
Bill Wright broke his leg on the day of the outbreak. Unable to join the evacuation, he watched the refugees leave London. He is trapped. He is alone. He can barely walk. The city has become home to the unread. To reach the safety of one of the coastal enclaves, he will have to venture out into the zombie-infested wasteland. On that journey he will ultimately discover the horrific truth about the outbreak, a decades old conspiracy, and his unwitting part in it. This is the first volume of his journal.

Main Image Courtesy: www.franktayell.com.
This content (including text, images, videos and other media) is published and used in accordance with Fair Use.