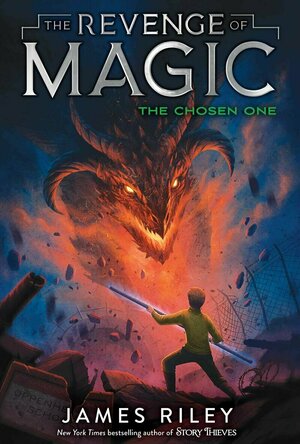 Fort and his friends face more perilous ancient magic as they race towards the final battle to save humanity in this fifth and final installment in the fantastical series from the author of the New York Times bestselling Story Thieves!

Fort Fitzgerald is finally reunited with his father and wants nothing more than for life to return to normal, the way things were before magic burst back into the world. But normal isn’t an option anymore. Not when the Old Ones could still return to enslave humanity and Damian is dead set on making that happen.

Convinced he’s the Chosen One the prophecy says will save the world, Damian has mastered all six books of magic and plans to summon the Old Ones to destroy them. Fort knows better though—Damian has no chance of defeating the Old Ones once they arrive.

Maybe Fort could stop Damian if he could use the magic from the dragon dictionary, but he’s consumed with strange visions each time he tries. The only hope left is for Fort, Jia, and Rachel to recruit the help of old friends—and enemies. But how can they know who to trust? Because unless they can find the truth behind the web of secrets and lies surrounding the prophecy of the Chosen One, Fort’s visions, Arthurian legends, and even magic itself, they've already lost.

Main Image Courtesy: Book Publisher.
Images And Data Courtesy Of: Aladdin.
This content (including text, images, videos and other media) is published and used in accordance with Fair Use.