The Comeback Kid by John Mulaney 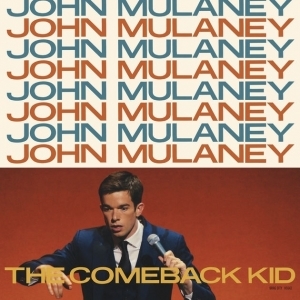 John Mulaney is an American comedian, writer, and actor best known for his standup specials and work as a television writer, including writing for Saturday Night Live from 2009-2013.

A fan of sketch comedy and sitcoms from childhood, the Chicago native studied English lit at Georgetown University before moving to New York City with plans to pursue work in comedy. He got an office job at Comedy Central and, after working there for about a year, pitched the idea for a spoof of VH1's I Love the '80s. He went on to develop I Love the '30s for Comedy Central with Nick Kroll and Brian Donovan. New episodes of the shorts ran on the network from 2005-2008 and brought him to the attention of other writer/comedians, including Mike Birbiglia and Demetri Martin, who hired him to write for TV projects.

Mulaney auditioned for Saturday Night Live in the summer of 2008 and was offered a job on the writing staff. On his first week off from the show, he flew to San Francisco and recorded his first comedy album, The Top Part, at the Punch Line. It was released by Comedy Central Records in March of 2009 and earned a dedicated fan base with his long-form stories about things like past struggles with alcohol and his obsession with the TV show Law & Order.

Mulaney took home his first Emmy in 2011 for co-writing Justin Timberlake's May 21, 2011 SNL monologue with Timberlake, Seth Meyers, and Katreese Barnes. They won for Outstanding Original Music and Lyrics. During his time with the show, he also created and wrote for the popular Bill Hader character, Stefon. His Comedy Central special New in Town arrived in January 2012 and got an audio release by Comedy Central Records. By then a well-known entity to comedy fans, it reached number one on the Billboard Comedy Albums chart.

In the fall of 2013, the Fox network picked up his multi-camera sitcom Mulaney. Mirroring Seinfeld, each episode opened with a segment of standup, with Mulaney playing a comedian living in New York City. The series, which co-starred Nasim Pedrad of SNL, Seaton Smith, Elliott Gould, and Martin Short, ran for 13 episodes before it was canceled in 2015. In the meantime, Mulaney appeared as a regular on Kroll's Kroll Show, and guested on late-night programs including Jimmy Kimmel Live!, Late Night with Seth Myers, and The Tonight Show Starring Jimmy Fallon. His third standup special, The Comeback Kid, premiered on Netflix in late 2015 and earned an Emmy nomination for Outstanding Writing for a Variety Special.

In September 2016, Mulaney and Kroll made their Broadway debuts in Oh, Hello. The comedy show centered on two middle-aged characters, George St. Geegland and Gil Faizon, that the duo had tested in clubs in the 2000s and later on Kroll Show. After Oh, Hello closed its run in January 2017, a comedy album version of The Comeback Kid was released on Drag City. ~ Marcy Donelson

Main Image Courtesy: Google .
Images And Data Courtesy Of: Drag City .
This content (including text, images, videos and other media) is published and used in accordance with Fair Use.