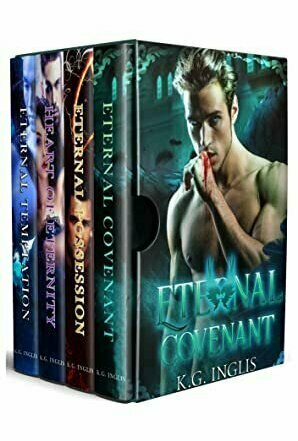 Eternal Covenant
Eternity Never Looked This Good
Cassie McLennan, a strong willed university student with an insatiable curiosity, seems to find herself in hot water on a regular basis. When a mysterious Tibetan monk appears in her professor’s office her nosy curiosity once again lures her into investigating. Only, this is one mystery she should have left well alone, when the monk is murdered and she’s the only one who can identify his killers.

Alaric has lived happily for hundreds of years as a recluse. Life was quiet. When Cassie finds herself on an assassin’s hit list, it’s up to him to protect her. However, the complication she brings to his life is more than just her fiery temper or her infuriating cousin, Alex. Alaric’s attraction to her is a temptation he is helpless to avoid, but claiming his Mate could see him banished to the Underworld.

Abby is shy and naïve when it comes to relationships, she's also Alex's Mate, or will be if she can find him and complete their blood bond. If she doesn't? He will die!

Then there’s Ahriman. Sure he's an evil fallen angel who enjoys dominating Alex, whose body he now cohabitates. But Alex isn't making it easy for him, not with his genius level IQ, and incredibly stubborn and irritating personality. Ahriman needs Alex alive, which means regular contact with Abby. He can handle the sex, the bond between them, not so much. But, how will it end?

Heart of Eternity
Sometimes Destiny Is More Powerful Than The Obstacles Standing In Your Way
For over 800 years Saladin has been a popular bachelor. In fact, the hinges on his revolving door are ready to self-combust. He’s feared and admired, except by Teagan, the one woman whose strength and defiance struck him with an instant attraction. It’s been two years since he last saw and without her, his life has begun to spiral out of control. He can’t feed, can’t sleep, can barely function, even his sanity is in question.

Teagan can’t help the desire the infuriatingly sexy vampire stirs in her. That doesn’t mean she’ll give into her contemptuous hormones. Saladin is dangerous and a complication she doesn’t need. Next in line to carry her family’s curse, she’s gained not only her family’s ancient power, she’s also now #1 on Morganna’s hit list. Staying alive long enough to break the curse, save her sister, defeat Morganna and find a way to be with Saladin, is a juggle of responsibilities and temptations.

Eternal Temptation
When Love Is Blind, Destiny Will Find A Way
As a Buddhist monk, Narayan’s life was simple, disciplined. Just the way he liked it. Two years ago his life changed. He no longer had the monastery to shelter him from the temptations of life, or his vampiric nature. Even so, he was determined to maintain his disciplined lifestyle, including chastity.

Ever the optimist, Paige believes in fairytale endings. That’s until she’s forced to drink an elixir incompatible with her Lycan genetics and her pleasant life turned into a nightmare.

Placed in an impossible position, Narayan must abandon his celibacy to ease her suffering until they can find a cure. But, lowering his self-imposed barriers awakens emotions and the very foundation he’s built his life on, begins to crumble.

Torn between her body’s needs and her guilt for making Narayan break his vow, Paige realises what she really needs from him, is the one thing he can’t offer. His heart.