The Exercise Of Vital Powers (Legends of the Order #1) 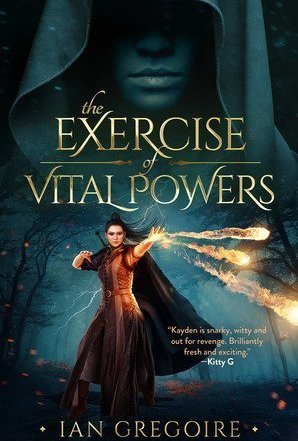 Some Lessons Must Be Learned The Hard Way.

Since its inception, The Order has been dedicated to the prevention of the misuse and abuse of magic. For seven decades this mandate has guaranteed peace and stability throughout The Nine Kingdoms. But a potential threat to the peace has emerged, and its source is much closer to home than the leadership of The Order may realise.

Arrogant, manipulative, confrontational and angry. Undesirable qualities in a person at the best of times, but more so in a young woman born with the power to bring kingdoms to their knees. Kayden Jayta, precocious apprentice of The Order, is all these things and more, yet wholly unwilling to acknowledge and rectify her many troubling traits.

Unbeknown to anyone, Kayden’s resolute determination to join the ranks of The Order is born of a secret that puts her priorities at odds with the precepts of the organisation, setting her inexorably on a collision course with the most powerful institution in The Nine Kingdoms.

If Kayden is to be dissuaded from walking the path she has chosen, averting tragic consequences in the process, two unanswered questions must be answered: What is the dark secret guiding Kayden’s actions? And, why has a legendary figure within The Order, with a secret of her own, taken undue interest in Kayden’s future?

Content warnings: Infrequent references to sex (nothing explicit), infrequent profanity (“only” 10 F-words), occasional violence (nothing graphic), one scene of domestic abuse/violence, one racial slur, and the loss of a parent.

Images And Data Courtesy Of: Lucid Dream.
This content (including text, images, videos and other media) is published and used in accordance with Fair Use.