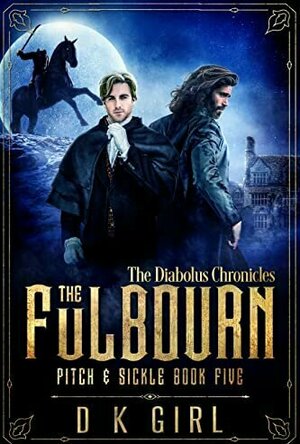 When the King of Daemonkind comes to call, be ready for hell to follow.
After Lucifer’s disturbing visit, the quest to destroy the Blight takes on a desperate urgency.

But what role does a mortal man play in Seraphiel’s dangerous game?

The angel has sent Pitch a talisman from beyond the grave, a seemingly innocuous watch that may be the key to ending the Watcher King’s dark legacy. But to learn its secret Pitch and Silas must find the man intended to carry it.

As the search for the lieutenant begins, the Horsemen find themselves gifted with something more precious than any angelic token. An evening of unexpected freedom.
A night that will deepen their intimacy and bring long-stifled feelings to the fore.

But what price will they pay for choosing breathless pleasure over rigid duty?

The Morrigan have not forgiven the destruction at the greensward. They are prepared to do whatever it takes to rid themselves of the Horsemen and heed the Watcher King's ghostly call.

The Fulbourn is Pitch and Silas's greatest threat yet.
A place that will drive them into the depths of their most terrible fears and seek to tear them apart.

They are closer than ever before but will that fragile new bond be enough to save them?
Or have the daemon prince and his ankou found the nemesis that will destroy them once and for all?

The Diabolus Chronicles is a slow-burn MM Gaslamp Fantasy series that contains on-page sex scenes, gore and violence, and rather a lot of cursing.

This is the fifth book in the on-going series.

**Reader Note - This book contains mention of a previous sexual assault (The Greensward), and suggestion of sexual assault. (No on-page depiction)

Main Image Courtesy: Amazon.
Images And Data Courtesy Of: Lucas Publishing.
This content (including text, images, videos and other media) is published and used in accordance with Fair Use.