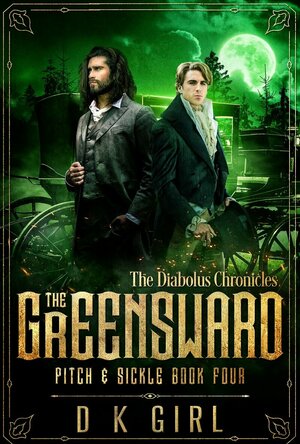 The Lady’s Horsemen are riding out once more. Carrying death’s scythe to where tormented souls linger.
But what awaits them in a world where divine magick has returned?

Pitch is recovered from the injuries he received in the Forest of Dean, and Silas won’t soon forget the part he played in setting his guardian back on his feet.
The ankou and the daemon have been reunited in a most unexpected and intimate way, but barely have they caught their breath when a new threat arises.
A tortured spirit is frightening both the living and the dead along the roads of Devon.
But is this soul a monster that must be stopped, or another pawn in the necromancer’s mysterious game?
With Azazel’s magick re-emerging after hundreds of years, maleficium plagues the world once more. But who is wielding the forbidden arcane magick of the angels?
Do they work alone?
And why are they so intent on harassing the Lady’s Horsemen?
Silas has never felt stronger, or more determined to live up to the Order’s high expectations. He’s faced the walking dead, outwitted the enchanted Hall, and gained an ally in the skriker.
But he’s not sure he’s equipped to handle his growing attraction to a troubled daemon.
And Silas fears that getting any closer to Pitch and his tragic secrets may prove as dangerous as the monsters they are riding to face.

The Diabolus Chronicles is a slow-burn MM Gaslamp Fantasy series that contains on-page sex scenes, gore and violence, and rather a lot of cursing.

This is the fourth book in the on-going series.

Main Image Courtesy: Amazon.
Images And Data Courtesy Of: Lucas Publishing.
This content (including text, images, videos and other media) is published and used in accordance with Fair Use.