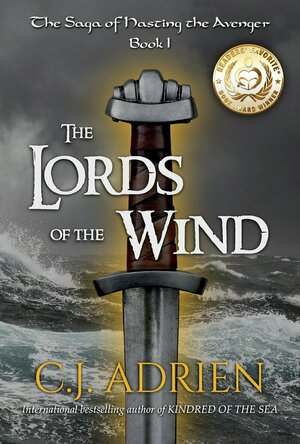 Orphaned as a child by a blood-feud, and sold as a slave to an exiled chieftain in Ireland, the boy Hasting had little hope of surviving to adulthood. The gods had other plans. A ship arrived at his master's longphort carrying a man who would alter the course of his destiny, and take him under his wing to teach him the ways of the Vikings. His is a story of a boy who was a slave, who became a warlord, and who helped topple an empire.

A supposed son of Ragnar Lodbrok, and referred to in the GestaNormannorum as the Scourge of the Somme and Loire, his life exemplified the qualities of the ideal Viking. Join author and historian C.J. Adrien on an adventure that explores the coming of age of the Viking Hasting, his first love, his first great trials, and his first betrayal.

"The Lords of the Wind" by C.J. Adrien is a gold medal winner in the 2020 Reader's Favorite annual international book award.contest.

Main Image Courtesy: Amazon.
Images And Data Courtesy Of: Runestone Books.
This content (including text, images, videos and other media) is published and used in accordance with Fair Use.