The Lost Ones (Detective Jackie Cooke #1) 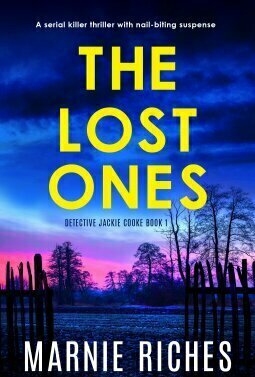 The young woman was sitting as though she might get up at any minute, her dark brown hair hanging over her shoulders. But her blue eyes were staring into the distance, into the future she would never get to see…

Despite all Detective Jackie Cooke’s experience, the murder of vulnerable teenager Chloe Smedley shakes her to the core. Chloe’s body has been left in a cold backyard, carefully posed to make it look like she could get up at any minute. As Jackie studies her innocent face, she vows to find the monster who did this.

When Jackie tells Chloe’s mother her daughter is gone, the woman’s cries cut through her. She knows the pain of an unsolved crime only too well – the disappearance of her brother as a child still haunts her family. Determined to solve the case, Jackie sets to work, finding footage of Chloe waving at someone the day she went missing. Did she know her killer?

But then a second body is found, arranged on the side of the road in another macabre scene, and Jackie becomes sure she is hunting a serial killer. Someone has been preying on the missing and vulnerable for decades. Only Jackie seems to see that they were never lost. They were taken.

Her boss is pushing for a quick solution and has no time for Jackie’s theory. But then Jackie returns home to find a brightly coloured bracelet on her kitchen counter – the same one her brother was wearing the day he vanished. The killer is taunting her directly. And Jackie will bring him to justice, no matter the risk…

Main Image Courtesy: https://marnieriches.com/.
Images And Data Courtesy Of: Bookouture.
This content (including text, images, videos and other media) is published and used in accordance with Fair Use.